Why you can't believe?

No matter how hardly explain, many seems have problem of believing these existence levels.  What can be the exact reason behind this difficulty of believing?

Is that because you can't see them, hear them, or feel them?  But think again, if that is the reason how many things you believe which you exactly can't see or can't listen or can't feel.

Have you ever seen radio waves?  Do you feel them?  But you believe them existing.  They do exist & that's why we can hear various sounds through the radio.

What about X - rays.  We can see them just because of the innovations of new technology.  But, imagine the time which X - Rays didn't identify and the new technology doesn't exists… is that mean that in those period X - Rays wasn't there?

The electricity, the wind, the air like Oxygen, etc… these things we can't see either… but still we believe they exists.  Then how we come to a conclusion that those things which we can't feel or see or listen doesn't exist in this universe?

Likewise a great scientist who happen to this universe also describe certain level of existence which normal human beings can't actually capture from their normal 5 senses.  But they also explained how it is simple to seem these unseen realms by improve their 5 senses in to super natural powers through meditation.

Religious teachers who had these kind of super natural powers explained about these unseen realms and warn us.  But like fools we believe in normal human beings with equipment and don't trust the wisest beings like Samma Sambuddha or Jesus or any other Spiritual teachers with mind power.  We sometimes even doubt that those kind of higher level beings exist or not. 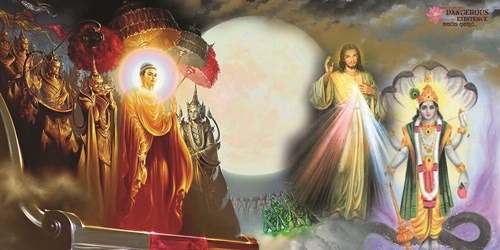 Believe it or not is totally up to your own self;

As I said no one benefited through your belief as you do.  Those who believe will guide them to their betterments and those who don't believe will follow their acts, speak according to the way they think is right and wrong, and possible to make their lives miserable or better.  Anyways my part is to explain what I understand according to the cause & effect theory.  So let me do my part and you make your decision accordingly.

"Nobody but you can save yourself, when you discipline your mind, body & words you become your own savior"  Let's see how we become our own savior through the discipline!