In another way this is also can identify as the cause.  The effect is always according to the cause.  That's how most of the time we happen to say, it's because of karma this is happening etc… etc…

How long does it exists?

The force made by previous karma decides the time period for the effect.

If you throw a ball to the sky it's moving higher & higher until it has the force which you have given to it.  When the power of force finishes its stop going higher and begins to move downward / falling.  Likewise the karma - The actions, words & thoughts also produce a force / energy and as long as that energy exists the effect also exists.

So, this basic idea of karma will be a help for you to get a clearer idea of the below explanations.  I will discuss about karma more in cause & effect theory & meditation so you get more understanding about the Karma.

We already created load of karma which is enough to hold us to the existence of zillion years.  Then how we can transcend these karmas to cease the existence?  If I explain through an example it will be easy to understand.

Have you seen sparklers?

A sparkler is a type of hand-held firework that burns slowly while emitting colored flames, sparks, and other effects. 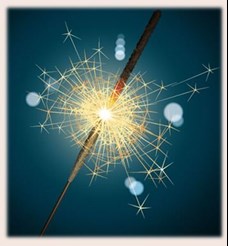 The "classic" type of sparkler consists of a stiff metal wire approximately 20 cm (8 inches) long that has been dipped in a thick batter of slow-burning pyrotechnic composition and allowed to dry.

Next page
Sparkler theory on Karma